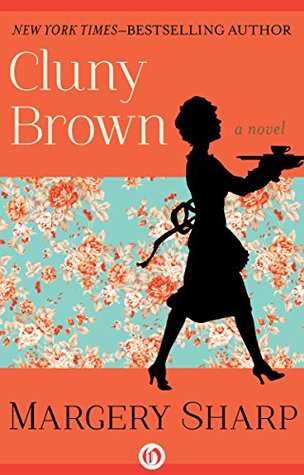 It’s hard not to feel for poor Cluny Brown. The orphaned girl is raised by her maternal aunt and her uncle. When Aunt Flossie dies, it’s Uncle Arn who takes charge of the young woman in the years just before World War II. Uncle Arn is a plumber, a successful one, in London but he does not believe that answering the phone for a plumber is the proper path in life for Clover “Cluny” Brown, his niece and ward. So he arranges for her to become a maid in the safety of the Devonshire countryside.

Cluny is not meant for the countryside, for service, or for someone else deciding just what she should do. She finds herself relishing her Wednesday afternoons off because she gets to play in the woods with the neighbor’s golden retriever.

Sharp parallels Cluny’s story with that of Andrew, the soon-to-be Lord of the Manor at Friars Carmel – the country house where Cluny is in service, who yearns to be anything but what his birthright says he should be. He wants to be part of the coming war, not married with children and looking after a farm.

Cluny and Andrew stumble along similar paths to marriage and lives that someone else wants to define. Andrew wants to rebel against his parents and marry a party-girl on the London scene but she turns out to be the perfect Lady of the Manor-in-waiting. Cluny charms a wealthy, successful pharmacist who proposes to her. And then she runs away to do what she wanted, at least what she wanted in that moment.

The novel is good. I was disappointed in the ending, because what I absolutely expected to happen never did. But it was a good ending just the same.

(I received a copy of Cluny Brown through NetGalley and the publisher in exchange for an honest and original review. All thoughts are my own. My review is cross-posted at NetGalley, Goodreads, and Adventures With Words – my book review blog.)