We are no longer blessed with innocence, nor do we deserve to be. Paradise may have been lost, but paradise is a bad bargain. It costs too much. It conceals serpents, and is littered with graves.

Being a history nerd, and proud of it, there isn’t any historical fiction that I’m not willing to try so when the chance to request this novelization of events during the Civil War came up, I took it with much excitement. And I am just as excited to have read it now that I’m finished.

It was a strange arrangement at first, a novel comprised entirely of letters and diary entries, with an occasional legal statement thrown in, and I did wonder if that could properly tell the story of Placidia Hockaday. I didn’t wonder for long.

Because all doubts were washed away the more I read.

Placidia, the “second Mrs. Hockaday,” is not a pampered daughter of the Confederate South in the way that Scarlett O’Hara was – and it is sort of impossible not to compare her to Scarlett. And yet it’s hard to doubt that Susan Rivers was not influenced by Scarlett as she wrote Placidia. Placi 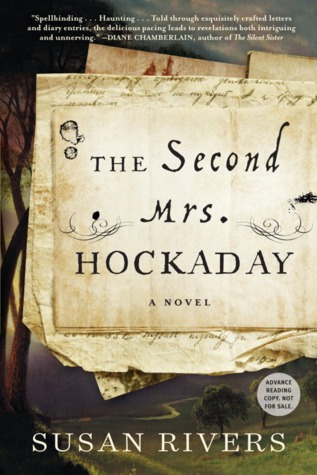 dia grows up on prosperous plantation that is kept working by slaves. When she marries Major Hockaday, after a single day of knowing each other, she moves to his home – which is kept working by slaves. But Major Hockaday makes few appearances in the story because he returns to the war days after the wedding. In his absence, the teenage Placidia is forced to manage the farm and the slaves on her own. And she does, coming to think of everything she knew – even the things she thought of her beloved father – in an entirely different light. For the better.

Until events she cannot control threaten to shatter her, sending her deep into a reclusive world of shame and depression that leads to the legal statements. But Placidia is strong and she survives it all, and more.

THE SECOND MRS. HOCKADAY is a story war and slavery, yes, but it is also the story of perseverance and determination. Of being able to hold your head high no matter what anyone says or thinks, because you know best what your own life is. And of self-discovery and learning as you live, being willing to see things in a different light and try to change them if you cannot accept them.

(I received a copy of THE SECOND MRS. HOCKADAY through NetGalley and Algonquin Books in exchange for an honest and original review. All thoughts are my own.)