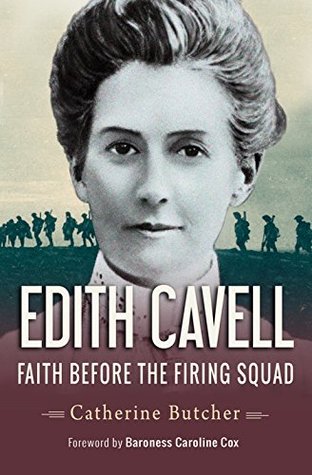 After reading Catherine Butcher’s biography of English nurse Edith Cavell, I kind of feel like all the history classes I took shortchanged me by never teaching me about this extraordinary woman. Florence Nightingale is fine but Edith Cavell should have been included too.

At the end of Butcher’s biography she quotes Prince Reginald de Croy as telling Edith Cavell’s mother that her daughter’s only crimes were “Pity and Humanity.” That simple phrase essentially sums up all that Edith did during her lifetime. Raised in a Christian household, she was taught early on that giving on oneself is more important than anything else. Unlike a lot of people, she remembered that until the day she was executed fairly early in World War I – executed for the crime of helping British and French soldiers trapped in Belgium escape capture and death by the Germans. Before that, though, she was a governess, a nurse, and a teacher. The things she did were for the betterment of others.

When the war began, it didn’t stop. The hospital she founded in Brussels continued to operate and it became an ideal place for soldiers to pass through.

Edith could have said no, refused to be a part of it. She could have gone home to England as her family tried to convince her to do. She didn’t. She said yes. Believing that the soldiers faced being shot if captured, she said yes. And when interrogated and put on trial, she admitted to helping 200 – though Butcher contends that sources place the number at closer to 1000. Knowing that the Germans wanted death for her, she told them at least a version of the truth so that they would not go after the nurses she thought of as sisters and daughters.

And when an Anglican priest was allowed to see her before the execution and he told her that she would be remembered as a heroine and a martyr, she told him she only wanted to do good for others.

Butcher’s biography focuses heavily on Cavell’s religious devotion. That almost put me off the book at first but I reminded myself that Victorian England was a time of religious devotion and that such devotion, whenever and wherever it appears, should work to produce extraordinary women like Edith Cavell.

Her story is tragic in how it ended but the meaning of her life is not. What she did, that two of the women in the resistance with her were spared execution and joined the resistance movements during World War II, is proof that there is hope for us yet.

I received a copy of Edith Cavell: Faith before the firing squadthrough NetGalley and Lion Hudson Plc in exchange for an honest and original review. All thoughts are my own.