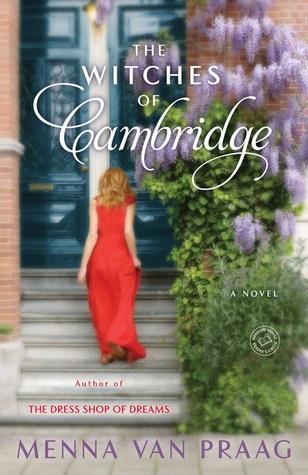 THE WITCHES OF CAMBRIDGE is about, without spoiling anything, witches in Cambridge, England. In Menna van Praag’s world, there are witches in Cambridge. They are a retired professor of women’s studies and literature, a professor of advanced mathematics, a professor of art history, an art history student, a bakery owner, and… I forget now if van Praag ever specifies exactly what the single man in the group does. But he is associated with Cambridge University, just as all the professors and the student in the bunch.

There is even, not surprisingly, a secret society of said witches who meet monthly atop one tower or another on the campus where they hover in the air and discuss whichever book they read that month. So it’s essentially a witches’ book club.

Which is fine because Heloise, her daughter Amandine, sisters Kat and Cosima, new girl Noa, and George don’t actually do that many witch-y things. They have supernatural abilities and they use them as much as they are burdened by them; feeling emotions from others, baking spells into baked goods, blurting out the absolute, most secret truths of everyone she meets… but there isn’t much magic, save for the sexy, mysterious, and eventually incredibly dark Santiago who seems to be an antagonist in the story because everybody else is inherently good.

The women, and George (whose biggest secret, when revealed, is sort of a cliche), are essentially ordinary women with the problems of ordinary women who just happen to have less than ordinary ways that they can deal with their problems. Not that it always works out for the better.

I think I would have loved the book if it had more magic, more witchcraft. I liked the book because the witches are relatable and I do understand. I finished it, because it was just interesting enough, but I can’t say that I’m going to read it again. Maybe.

Note: THE WITCHES OF CAMBRIDGE has an expected publication date of February 9, 2016. This is a review of an advance copy.

(I received a copy of THE WITCHES OF CAMBRIDGE through NetGalley and Ballantine in exchange for an honest and original review. All thoughts are my own. Review cross-posted at NetGalley, Goodreads, and on my blog.)