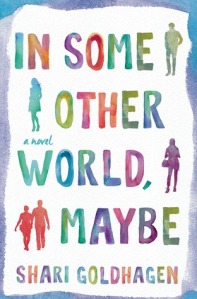 The thing that drew me to Shari Goldhagen’s novel IN SOME OTHER WORLD, MAYBE was the cover. Once I investigated the cover, I found a book based on the intertwined lives of the fans of an sci-fi franchise known as Eons & Empires. This caught me too, because I have belonged and still belonged to fandoms in which I’ve made some of the best friends I know I will ever know.

So it was sort of reading vicariously about myself a little.

Goldhagen’s characters interact, they connect because they love a fantasy, and they experience events that rock their lives (Bush v. Gore, 9/11, the plane that landed on the Hudson) as one. Some of her characters do as they’re “supposed” to do and play by the rules. Some follow their dreams until their dreams peter out. Some never give up on their dreams.

What makes this mish-mash of vaguely connected people something to read is that they are real. Their successes and failures at life and love are the same as what fans of Star Trek, one soap opera or another, Twilight… have experienced. And it’s always easier to read about some fictional person’s for-better-and-worse than it is to focus on our own.

The biggest success of the book is that I now want to see the franchise Goldhagen created to tie her people together!

I received a copy of IN SOME OTHER WORLD, MAYBE from NetGalley + St. Martin’s Press in exchange for an honest & original review.