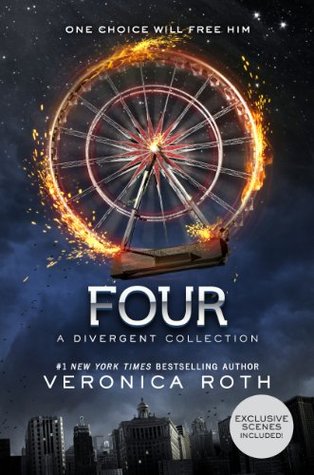 Veronica Roth gets bonus points for writing and publishing FOUR: A DIVERGENT COLLECTION.

The thing with the YA series that are so popular (Twilight, The Hunger Games, and Divergent for the purposes of this review) is that they are from the first person perspective of the girl. This is not a bad thing, not at all. It’s just that, as a personal preference, I find the boys in the stories are just as important to the story as a whole. This means I want to read the story a second time from Edward, Peeta, and Four’s perspectives.

Stephenie Meyer did a bit of that with the unpublished and unfinished MIDNIGHT SUN and it left me wanting more.

Veronica Roth gave the world a taste of Four with the alternating perspectives in ALLEGIANT but I wanted more. And I got it.

FOUR: A DIVERGENT COLLECTION is entirely focused on pre-DIVERGENT stories and during-DIVERGENT scenes. As an aside, this makes me want to know about him during INSURGENT. But to the point of what it is, it couldn’t have been better.

It was proven, again, that as much as Tris is the main character in the series, Four is as interesting a character – if not more so – than she is. There are so many layers to him, it’s hard to figure out just who he is and who he wants to be. And that’s how it should be.

I think I like the characters who support Four (i.e. Zeke, Shauna, Amar, Tori, Max, Evelyn, and even Marcus) more than those who support Tris. Zeke and Shauna are what true friends should be and I’m doubly glad that ALLEGIANT ends the way it does for them.

The only complaint I have, and even then it’s not really a complaint, is that some of the facts offered in the collection would have been useful to have when I read DIVERGENT. And yes, that does mean I’ll be re-reading the three books soon.