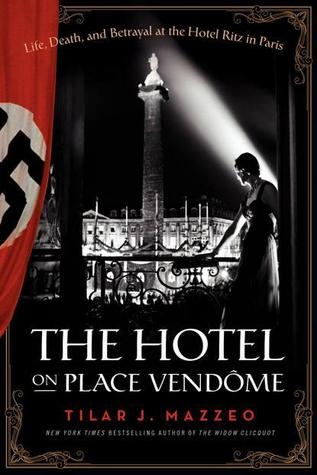 Let’s start with what I loved.

The honed in view of one of the most famous hotels in the world during such an important time in history was an excellent idea for a book. The period in Europe from the Dreyfus Affair through the post-World War II years is fascinating. It’s more so when you’ve got a select place and a select group of people to focus on.

Tilar J. Mazzeo focused mainly on Coco Chanel (who I learned – to my general shock, dismay, and awkward delight – was a very much anti-Semitic, pro-Nazi when need be, pro-Allies when need be, self-preserving woman … exactly what one might expect, I suppose) and Ernest Hemingway (who I learned – to very little surprise – was exactly what I expected; a pompous, self-important, womanizer).

It’s the few lesser known people Mazzeo chronicles; Blanche Auzello and Laura Mae Corrigan primarily, that make the book worth reading. They and a few others like them are the definition of what the book’s title promises and it’s a shame more pages weren’t dedicated to them. But then, I suppose Chanel and Hemingway make better marketing strategies. I won’t say more about Auzello and Corrigan here because their stories are worth reading and I think there’s a good chance you’ll enjoy reading them if this is your sort of book.

And now for what I didn’t love so much.

Mazzeo said in her introduction that the widow of a man who fought with the French Resistance, a very well to-do man, warned her not to write the book. The woman told the author that it was too easy to claim one had been part of the Resistance just because it was the popular thing to do. That declaration set up my expectations for an exciting tale of life, death, and betrayal – as the title promised. I was sorely disappointed on that front.

Yes, people lived in the Hotel Ritz during World War II and the decades preceding it. Yes, the rich who could afford to live there betrayed each other whenever they could, but they rarely seem to have betrayed their country – especially given that many of them were either Americans like Hemingway or Germans like Goerring. And I’m sure people died there, but none of the people Mazzeo focused on. Not a one.

It seems like a silly thing to complain about, but it’s true.

I don’t regret spending the time and energy to read this book. I learned a lot from it. The trouble came when I was getting from one thing I learned to another. It wasn’t always easy. I’m keeping the book, though, and I’m telling you that you ought to consider reading it. That being said, I don’t know when I’d be inclined to re-read it.

(I received a copy of The Hotel on Place Vendome as part of the Goodreads First Reads giveaway program.)

(This review will be cross-posted on my blog and on my Goodreads account.)